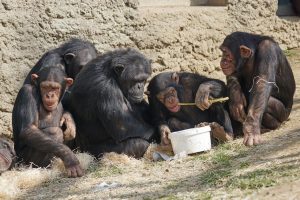 When Michael Tomasello was an undergraduate student at Duke University studying developmental psychology, he studied the theories of Jean Piaget, a psychologist who thought evolutionarily. “He was looking at children like they were a different species,” Tomasello recalls. “He would always emphasize that they have their own way and own logic, and that we shouldn’t make them into little adults and we need to understand how they understand the world around them.”

Now a professor at Duke, Tomasello has taken these dual concepts of development and evolution and applied them toward understanding what distinguishes people from other apes. He got his first exposure to non-human primates when a developmental psychologist at Emory. Visiting the Yerkes Primate Center with a colleague, he observed how similar apes and people were: “The chimps had the same emotions, were using tools, playing just like children do, gesturing in interesting ways that are similar,” he says. “Then one of the chimps sitting in a tree limb starts urinating and one of the other ones comes underneath and opens mouth and catches it. I realized in that moment that what makes it fascinating is that chimps are so similar to us in so many ways and yet so different in other ways.”

In his upcoming keynote lecture at the annual CNS meeting this March in Boston, Tomasello will be sharing insights from his years of research studying children and apes. We spoke with Tomasello about his talk, areas of research for cognitive neuroscience, misconceptions about people and apes, and how he talks about the topic with his 8-year-old daughter. 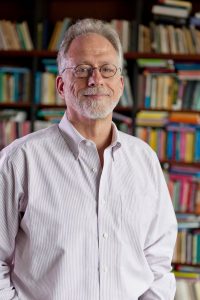 CNS: Tell us about one study or set of insights that you are excited to share in your upcoming CNS 2020 keynote.

Tomasello: I will do a lot of comparing great apes to young children. If children produce collaborative resources, by cooperating and pulling them in, they tend to divide them equally almost always.In an experiment where we actually rigged it so that one child gets more than the others, the one who had more gave resources to the other children to equalize them. With chimps, you don’t see that; they don’t care about fairness. This gives us a possible hint at the evolutionary roots of fairness — that it comes from dividing resources from collaboration fairly, and it’s probably unique to humans.

CNS: Were you surprised by these results?

Tomasello: Not in this study but we were surprised by the study before this one on which this was based. In the prior study, children pulled in a board with candies either on each side or in the middle. When the candies were in the middle of the board, it presented a problem of how to divide them up; when they were already separated, it was not a problem. The chimpanzees in that study could only collaborate when the resources were separated to start. When the food was in the middle, the dominant tended to take it all and the subordinate was out of luck and couldn’t cooperate. The chimps couldn’t keep doing it over trials because they couldn’t find a balance to make everyone happy. But the children, on the other hand, could do this time after time after time — dividing resources equally pretty much every time.

CNS: Were there times the children didn’t divide the candies evenly?

Tomasello: Yes, and that’s how we got the idea for the follow-up study I described earlier. Every once in a while, one of the children would take more than her fair share and the other child would say “hey” and protest, and the one with more would give it over. Children typically don’t give up candies to other children voluntarily without adult intervention, so we were very much taken by that and wondered if they would try to equalize resources if uneven right from the beginning — hence the subsequent study.

CNS: So, fairness is important for humans. Why?

Tomasello: If you look at all the stuff we think of as uniquely human, it’s almost all a product of culture or cooperation in one way or another. Language is a social thing that we learn from one another. We developed math with Arabic numerals a couple thousand years ago and taught and passed it down in schools. We collaborate in social institutions like universities and societies, like CNS. A lot of the most impressive things we do are cultural or collaborative in one way or another. The hypothesis is that there came a point in human evolution where getting food required collaboration. No one person could catch an animal on his own but working together, people could surround the animal and kill it for dinner. So there came a time when you had to be a good collaborator to survive and thrive.

CNS: And chimps can’t do that?

Tomasello: That’s right. If you asked why chimps don’t collaborate more, the most basic issue is that they can’t divide spoils in a way that is mutually satisfactory. A sense of fairness is somehow tied to the notion of both parties being happy with a result over time. If you hog the food now, then next time I might not want to collaborate again. If I want to be a good collaborative partner, I need to share. So, fairness evolved to keep everyone happy in collaboration.

CNS: What do we know about the neural correlates of fairness?

Tomasello: We don’t know much about it in humans or apes for practical reasons. Psychology and cognitive neuroscience as a whole are focused mainly on the individual. While social psychology looks more at social processes, the kinds of social interactions that people have are not easy to capture in a scanner. I would love to see more work to figure out how to do it.

CNS: So that’s an area rich for exploration in cognitive neuroscience?

CNS: What are common misconceptions you encounter about evolution?

Tomasello: The most common misconception is that evolution is like a ladder that has been moving up and humans are at the pinnacle and all the other creatures are steps on the way to humans. Darwin put that to rest a long time ago. All the creatures that are around today all have evolutionary histories like humans — and we’re not better or worse than them, all just our own species with our own ways of adapting.

Humans are inherently cooperative. We are defined by our ability to put our heads together to cooperate and teach our youngsters. That’s really what defines us as a special type of ape.

CNS: What about common misconceptions about apes v. people

Tomasello: Many members of the public have an overinflated view of other apes, where they think of them in human-like terms. Many people are surprised, for example, that chimps don’t teach one another. That’s a real difference with humans. We have all these things we could never learn on our own. For example, I would never learn algebra on my own; someone had to teach me. I’d probably never learn how to ride a bicycle unless someone taught me.

My 8-year-old daughter is insistent that all animals have their own language where they talk to one another. And I say, “well, they communicate but it’s not exactly a language.” The gap between humans and apes looms larger than people often think.

CNS: What other conversations do you have with your 8-year-old about apes v. people?

Tomasello: I sometimes tell her she’s acting like a chimp when she’s being selfish. I also tell her about a time when I helped a couple orphan chimps before they were put in a social group: We’d give them whole food basket with vegetables and healthy items at the top and hide the fruit on the bottom. Every single time, they would rifle through bowl to get to the good stuff, the bananas and grapes at the bottom, and save the lettuce and carrots for last. Human kids do that too at an early age — so I’d accuse my daughter of being chimp like when she’d do that. But now that she’s older, like a lot of kids, she wants to save the best for last — and I now say that’s very un-chimplike

CNS: What do you hope people will take away from your keynote address?

Tomasello: Humans are inherently cooperative. We are defined by our ability to put our heads together to cooperate and teach our youngsters. That’s really what defines us as a special type of ape. One of the things people say to me all the time — is “you emphasize cooperation but I read the paper everyday and it doesn’t look so cooperative” or “I have my kids at home and they don’t seem so cooperative,” but I explain it’s all relative. Chimps don’t cooperate in some basic ways. Human cooperation is complicated because we are also selfish but in an evolutionary context, humans are extraordinarily cooperative.

Previous article: Modeling Learning Across the Lifespan
Next article: Juggling the Early Years of a Cognitive Neuroscience Career