In the 19th and 20th century, cases of individuals with brain injury, such as Phineas Gage or Henry Molaison, have advanced our understanding of the relationship between the anatomy of the brain and its function. Back then, methods were limited to investigate whole-brain structure and function. Now, cognitive neuroscientists have some ability to visualize and measure activity of the whole brain at once, as well as the computational tools to investigate complex network-level relationships between brain structure, brain function, and behavior.

As a doctoral student working on stroke recovery, attending the CNS 2021 symposium led by Danielle Bassett was an incredible opportunity to learn more about some of the most recent methods that have been developed to understand how the anatomy and integrity of brain networks impact higher-level cognition. Strokes highly disrupt anatomical and functional connectivity, leading to cognitive and motor impairments. In individuals with post-stroke language impairments, namely aphasia, evidence shows that the more functional brain networks recover an organization similar to healthy individuals the better the recovery (Kiran et al., 2019). Understanding the relationship between brain structure and function in health and disease is therefore essential to develop appropriate treatments.

As a doctoral student working on stroke recovery, attending the CNS 2021 symposium led by Danielle Bassett was an incredible opportunity to learn more about some of the most recent methods that have been developed to understand how the anatomy and integrity of brain networks impact higher-level cognition.

At this CNS symposium, the speakers showed how different models can help us better understand brain structural organization and how this particular organization constrains cognitive processes. They also showed direct relationships between alteration of anatomical networks, caused by disease or behavioral training, and changes in behavioral performance.

Understanding the organization of the brain goes beyond the simple localization of different functions, noted Sofie Valk of the Max Planck Institute for Human Cognitive and Brain Sciences. During this symposium, Maria Giulia Preti of the Ecole Polytechnique Fédérale de Lausanne (EPFL) and Bassett of the University of Pennsylvania presented two network-based methods used to derive brain structure-function principles.

First, Preti proposed graph signal processing as an intermediate alternative method between simple correlations of functional and structural matrices and structural connectivity and more complex whole-brain computational modeling. She used this method to combine information from structural and functional connectivity in order to reveal how brain activity is coupled to (i.e. dependent on) the network structure at each moment in time during rest or during a task. 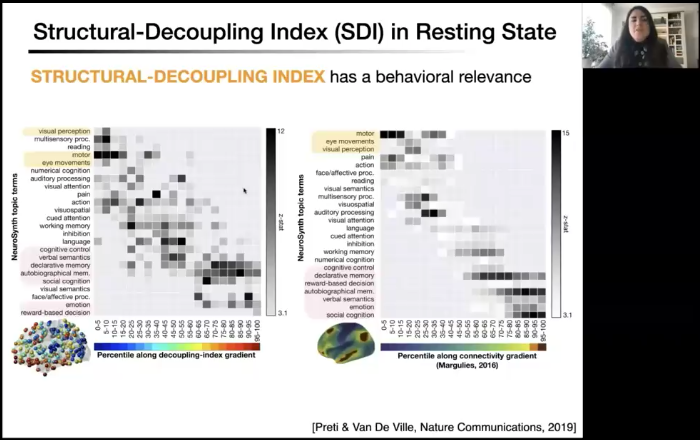 Through the application of this technique on a dataset of 56 healthy individuals, Preti found that sensory areas (e.g. regions involved in visual or auditory processing) were more strongly coupled to brain structure whereas higher-order cognitive regions (e.g. regions involved in executive function or language) were more decoupled. In other words, by decomposing functional neural signal and relating it to structural network components, Petri showed that brain activity “fits” in a more direct way to anatomical constraints of the connectome in areas involved in primary sensorimotor functions than in transmodal areas where the activity may be less predictable.

Within this global organization, how does brain architecture impact brain activity transition from one state to another? As Bassett explained, this question is particularly important when individuals perform tasks that require the control of different cognitive processes to achieve a goal (e.g. decision-making). Bassett demonstrated that spatial topology of brain networks plays an important role in constraining state transitions. She developed a “network control theory” to further define what features of the brain architecture make some state transitions easier versus more difficult. This mathematical framework characterizes the state of brain regions over time given the previous functional state of the brain, structural connections between brain regions, the subset of regions that receive energy and the amount of energy required.

Bassett’s model showed that regions that are important for transient control processes, such as the fronto-parietal network, are in fact characterized by high “modal controllability.” Specifically, the anatomical architecture of these cognitive control regions make them predisposed to push the brain into states that are more difficult to reach and that require more energy. On the opposite, regions that are more active at rest (i.e. when someone is not actively doing a task), also called the default mode network, are structurally predisposed to push the brain into “easy-to-reach” states in terms of energy required, corresponding to high “average controllability.”

Interestingly, Bassett’s team found that executive function performance was strongly related to this network controllability feature, and individuals who required less control energy to activate frontoparietal regions showed better performance. Using the network control theory, she was able to demonstrate that brain networks architecture constrains how easy or difficult it is for neural activity to transition from one state to another. 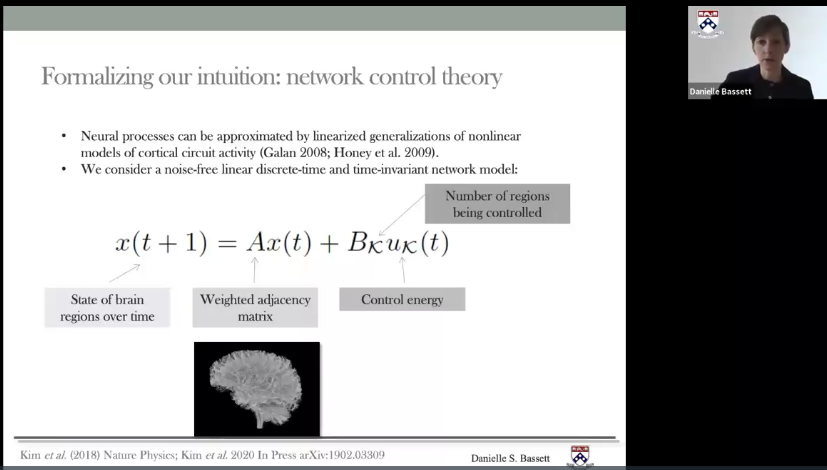 Thanks to these frameworks and previous work on this topic, it becomes clear that brain function is particularly dependent on neural systems architecture. In addition, brain structure continuously evolves throughout a lifetime as a consequence of experience-induced brain plasticity or neurological diseases. How do these network alterations impact cognitive processes?

But there is hope! Humans can modify their functional brain organization with mental training. In an experiment investigating social cognition, Valk demonstrated that different types of mental training resulted in different changes within and between the three social networks examined: These networks became more segregated and more centered on their own function after the “presence” training (focused on being present), whereas the “perspective change” training resulted in more integration between networks.

These fascinating presentations revealed the complementarity of network theories, mathematical models, and neuroimaging analyses in health and disease to better understand how brain anatomical architecture influences higher-order cognitive functions in humans. These talks were for me inspiring examples of how the scientific community can incrementally develop new and meaningful approaches to extend the boundaries of our shared knowledge on brain organization and function.

Anne Billot, M.S., is a doctoral student in the Department of Behavioral Neuroscience at Boston University. She studies the neural basis of post-stroke aphasia and language recovery at the Aphasia Research Laboratory of Sargent College of Health and Rehabilitation Sciences with Swathi Kiran.

She would like to thank all essential workers who have been at the frontline during the COVID-19 pandemic. We are tremendously grateful for everything that you are doing to keep our community healthy, safe, and functioning.

Previous article: Learning to Transition and Adapt as Trainees in COVID Times
Next article: Now Playing: Special Session in Honor of Brenda Milner, a Lifetime in Brain Science