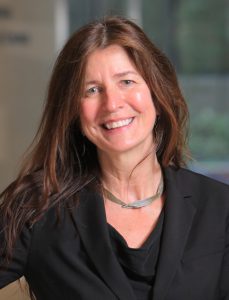 Looking back on her career to date, what stands out for B.J. Casey are the tremendous strides cognitive neuroscientists have made in conducting large-scale studies that get at what is happening inside the human brain. She thinks back to early studies done with only a few subjects and the modern realization that it can take thousands of subjects to understand the mind and brain at a representative level.

“Some of the most fascinating findings that have emerged are on just how different the adolescent brain is from the child  and adult brain. We used to think of this development as linear,” says Casey, a cognitive neuroscientist at Yale University who is the recipient of the CNS 2022 George A. Miller Award. “Now we have discovered adolescent-specific changes in brain structure and function, and in how brain circuits and networks are communicating with one another.”

This body of work over the past few decades, led in part by Casey, has led not only to better understanding of the adolescent brain but also to new treatments and policies related to medicine and the justice system. “That gets me really excited, because that means that we’re working toward improving the lives of young people. And if we’re improving the lives of young people, then we’re improving our society,” Casey says.

CNS spoke with Casey about her work on the adolescent brain, her early start in cognitive neuroscience, and her upcoming award talk at the CNS annual meeting in San Francisco in April.

I think that our legal system overestimates the cognitive capacity of young people; in emotionally charged situations in which they often come into contact with the law, we see diminished cognitive control in young people that extends well into their 20s.

CNS: Can you give us a little preview of what you will talk about in your April award lecture?

Casey: The talk is going to focus on how cognitive neuroscience is informing our understanding of the developing mind and brain, and, in particular, the implications that it has for the treatment of young people, not only in medicine but also in law and policy.

Much of my recent work has been centered or framed within the context of reforming our legal system in the United States, particularly with regard to severe sentencing of young offenders, and the age at which an individual becomes an adult or has the full capacity of an adult. I think that our legal system overestimates the cognitive capacity of young people; in emotionally charged situations in which they often come into contact with the law, we see diminished cognitive control in young people that extends well into their 20s. In my talk, I’ll be sharing some of our work showing functionally significant changes in the brain into the mid 20s, and how we might  use this information to inform policy.

CNS: Have you had success so far in translating your research to apply within the legal system?

Casey: I think as a field, that developmental science has had a significant impact, especially on US Supreme Court rulings prohibiting the death penalty and mandatory life without parole sentences for juveniles under 18. Empirical findings from our lab and others were important in these rulings.

More recently, working with interdisciplinary teams as part of the MacArthur Foundation Research Network on Law and Neuroscience and the Justice Collaboratory of Yale Law  School, I have been focusing on the relevance of functionally significant changes in the brain beyond 17 to the treatment and sentencing of young offenders in their late teens and early twenties. We are seeing changes across the country in the treatment of these offenders, with young adult courts and experimental correctional units tailored to their developmental needs and successful reentry in society while also focusing on accountability. I believe our work and that of many others, like my Yale colleague, Arielle Baskin-Sommers, who even has a lab in a local correctional facility, has the potential to inform these policies of change in the treatment of young offenders.

CNS: Are there any other areas of research you will be presenting on?

Casey: Yes, another area where our discoveries about the adolescent brain are potentially informing the treatment of young people is in medicine, specifically related to the treatment of anxiety and stress related disorders, which unfortunately are fairly common in youth. We found that while children, adolescents, and adults showed an equivalent ability to acquire cued fear memories, the ability to extinguish these memories was diminished in adolescents. Diminished cued fear extinction has also been shown in adolescent mice and rodents and associated with developmental changes in the prefrontal function. Why this is interesting is because a common treatment for stress and anxiety disorders is cognitive behavioral therapy (CBT), which often involves repeated presentation of the individual to what’s triggering their anxiety, or fear. This exposure therapy is based on the very principles of fear extinction, so if you see diminished fear extinction during adolescence, it may suggest that we need to consider how we can best optimize CBT for adolescents. One possibility is to try to bypass the prefrontal cortex circuitry or engage other circuitry or mechanisms.

CNS: What would be an example of an alternative  approach?

Casey:  We and others have had some success diminishing cued fear memories in adolescents by targeting hippocampal circuitry and by attempting to bypass the prefrontal cortex to modify the actual memory itself, at the level of the amygdala. This builds on human and rodent adult studies by Liz Phelps and Joe LeDoux. My Yale colleague, Dylan Gee, for example, is using safety signals during extinction to diminish fear memories. Although there is much work to be done, it is still exciting to see so many investigators making strides in this area given the high prevalence of anxiety and stress disorders in young people.

CNS: Looking forward to the talk! So how did you get into cognitive neuroscience in the first place?

Casey: When I began graduate school – and this was before the emergence of fMRI –  I was working with John Richards on the development of visual attention in infants at the University of South Carolina. In infants, looking behavior is a common measure of attention, but just because an infant is looking at something does not mean they are actually attending to it, right? How many times have you looked at another person when they are talking, but been a million miles away? So to help us capture changes in attention in the infant, we examined changes in heart rate and heart rate variability. I found this work fascinating but what I really wanted to do was to look inside the developing behaving brain noninvasively to see what was going on.

That wish came true when I landed a post doc at the NIMH with Judy Rapaport in 1990. At first I was using structural MRI to study the developing brain, but I remember the excitement of reading the first papers reporting how MRI could be used to noninvasively look at brain function! One of the authors was at NIH, so I began volunteering my time as a subject so that I could learn more about the methodology, and then – being in the right place at the right time – went on to begin the first studies of functional human brain development with fMRI and it just took off from there.

During the pandemic, what I have missed most are the casual conversations about science you have when in-person, where all of a sudden, you get this novel idea. It’s just amazing how casual conversations with others about your work and theirs can catapult the science to a whole new level in a matter of minutes.

CNS: How did you specifically get interested in the legal system as it relates to adolescents?

Casey: There have been several cases that have impacted me and my research related to policy and law, but the one that has really influenced me the most over recent years is the Kalief Browder case. At the age of 16, Browder was accused of stealing a backpack and was sent to the notorious Rikers Island correctional facility here in New York. He was held there not because  he was found guilty of any crime, but because his family could not afford to pay his bail and he maintained his innocence, refusing to take a plea bargain that would have resulted in his release. Eventually the charges against him were dropped but not until he had spent 3 years at Rikers, 2 of which in solitary confinement. At the age of 22, Browder took his own life.

This case really left an impression on me, not only because of the horrific and inhumane treatment this young person endured, but also because he was close to my own son’s age. So anything I could do in my own research that might inform policy on the humane treatment of youth in our legal system became a real priority for me.

CNS: Last question: What are you most looking forward to for the CNS annual meeting this April?

Casey: During the pandemic, what I have missed most are the casual conversations about science you have when in-person, where all of a sudden, you get this novel idea. It’s just amazing how casual conversations with others about your work and theirs can catapult the science to a whole new level in a matter of minutes. And I feel like many of us while we’ve been communicating with other people over Zoom and a bit more in person, we have been more siloed and have had less opportunity to have those everyday casual exchanges that we took for granted. It’s those conversations when you’re diagramming ideas and experiments on a napkin, or you’re scribbling something on a board if you have access to one, that helps to boost creativity. Also, the stress of the pandemic can limit creativity and broad thinking. So, I’m excited about the conference, even though I’m a bit worried about what this new variant will bring.

Previous article: From Social Media Use to Social Isolation: New Insights About the Adolescent Brain
Next article: Remembering Under Threat