In high school and then into undergraduate school, Sabine Kastner was most interested in the humanities: literature, history, and philosophy. But she would have a formative experience attending a public “Christmas Lecture” by neurologist and neurophysiologist Otto Creutzfeldt in the mid-1980s about the connection between Kant’s philosophy and neuroscience.

“For Creutzfeldt to talk about such matters as a neuroscientist was revolutionary at the time,” Kastner recalls. “For me, it was a life- and career-changing event. After that lecture, I was sure that my thinking and questioning about the mind — regarding issues of self-awareness and conscious perception — would not be ‘solved’ at the level of reasoning, but at the level of conducting experiments to understand the underlying neural basis.”

Creutzfeldt would become her PhD mentor, and she would also come to work with Leslie Ungerleider, among others – learning how to transform deep philosophical questions about the mind into tractable, hypothesis-driven experiments. Now a leader in the cognitive science of visual perception and selective attention at Princeton Neuroscience Institute, Kastner is the 2023 recipient of the George A. Miller Prize. She will present on this body of work at the CNS 30th anniversary annual meeting this March in San Francisco. I spoke with Kastner to learn more about the work she will be presenting, as well as her focus on outreach and education. 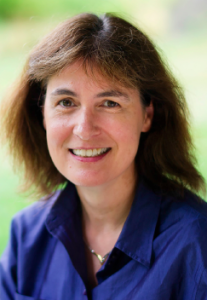 CNS: What is your rhythmic theory of attention, in brief?

Kastner: Attention function is controlled by populations of neurons in the frontal and parietal cortex. These neuronal populations consist broadly of two classes of neurons with different functions: One class – the visual neurons – are engaged during the processing of visual information; the other class – the motor neurons – are engaged when we move our gaze or shift attention to a new location. These two populations of neurons are in functional conflict. When you move your eyes, you cannot process visual information, and when you process visual information, you shouldn’t move your eyes. Attention-related theta rhythms coordinate the two populations of neurons into alternating states such that one state is characterized by enhancing visual and suppressing motor neurons, and the other state is characterized by a relative suppression of visual processing and a release of inhibition from the motor system. As a result, the former state emphasizes sampling of information from the environment, and the latter shifting of the eyes or shifting attention to a new location. These alternating states may be key to understanding the flexibility of attention function.

CNS: What has been the major bottleneck in neuroscience efforts to understand selective attention?

Kastner: All cognition happens at the level of networks. For example, the attention network is comprised of cortical regions that are distributed across all major lobes and include subcortical regions in the midbrain and thalamus. Such a network informs behavioral outcomes on very short time scales (typically a few hundred milliseconds). Thus, the computations in each node and the functional interactions across the network are highly efficient. However, we have only a very beginning understanding about the mechanistic underpinnings, particularly with regard to network interactions. What is the communication structure of the multiple nodes across such a vast network to drive behavior so effectively? How can the network adapt to adjust to changing behavioral demands to achieve cognitive flexibility? Given that attention function is fundamental to cognition in general, how is the attention network coordinated with other cognitive networks, e.g. for memory or executive functioning? These are some of the big questions that we need to understand if we want to make progress in our field.

CNS: What new findings are you most excited by and why?

Kastner: Bridging all the way from cell biology to systems neuroscience and behavior will be an important task for this and the next generation of neuroscientists. From my own work, where I use two brain models, the human and monkey brain, I appreciate how difficult it can be to build such bridges. I am really excited about work at the intersections of different subfields in neuroscience – this is where such bridges can evolve. In my career, I have benefitted the most from work in large consortia of scientists with different expertise, who work on a common theme. We are just starting a consortium on a large mysterious brain structure, the thalamus, and its role in cognition. Solving longstanding puzzles like this is exciting to me.

CNS: Are there translational aspects of your work you can discuss?

Kastner: Even though my work is basic research and is directed at understanding functions of the neurotypical brain, the ultimate goal is that my work will contribute to an understanding of attention deficits that are not only observed in childhood (e.g. ADHD), but also in psychiatric disorders (e.g. schizophrenia) and neurological diseases (e.g. after stroke). In my view, understanding the workings of the neurotypical brain is the foundation to study deviations such as in disease or atypical neurodevelopment. As an MD, the translational potential of my work has always been very important to me.

CNS: How does your cognitive development work fit into this broader body of work?

Kastner: We have developed excellent theoretical frameworks about selective attention, and these frameworks have been supported by an abundance of experimental findings in the adult brain. It is now a good time to use and apply some of that knowledge to translational questions, such as “how are brains of individuals with ADHD different?”, and to questions of neurocognitive development. We know very little about the neurodevelopment of this cognitive function that is so fundamental to all other cognition.

CNS: What do you most want cognitive neuroscientists to understand about the work you are doing?

Kastner: I think my peers appreciate the scientific work that I am doing, at least to some extent!. But I think a neuroscientist in the 21st century can be more than just an academic. During the last years I have engaged in a large number of outreach activities, which have been very rewarding. This outreach program often involves my students and postdocs in the hopes that performing outreach will become second nature for them and part of being a scientist. 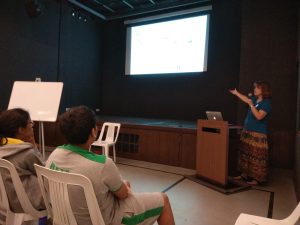 Kastner doing outreach (pre-pandemic) at a school in Mumbai, India.

CNS: Tell me more about these outreach activities.

Kastner: One area of outreach is aimed at promoting neuroscience in school education. I am Editor-in-Chief of the first online neuroscience journal for kids, Frontiers for Young Minds – Understanding neuroscience. The major scope of the journal is to enhance science education for late elementary and middle school ages. As part of this project, I am writing neuroscience articles for kids regularly and perform classroom reviews of articles submitted to the journal at elementary and middle schools in Trenton and Princeton together with the science teachers. We also invite an elementary or middle school grade for a hands-on science day to the Princeton Neuroscience Institute once a year, where the kids learn about techniques to study the human brain by participating in EEG and fMRI experiments.

In a second outreach project, I am part of a number of initiatives to foster the careers of females in science. For example, we regularly participate at Princeton’s “Young Women’s Science Conference,” a science fair that aims at encouraging female high school students from the greater NYC area to become interested in life sciences.

A third outreach project is aimed at advocating for children with neurodevelopmental disorders and their families. As a parent of a child with special needs, I engage in activities that are aimed at educating families, affected individuals, and their support groups about the brain mechanisms underlying neurodevelopmental challenges and interventions that are based on brain science.

I feel enormously privileged to be a scientist, and I am thankful to society providing me with the resources to do my work. Giving back to society should be an important mission for all scientists.

CNS: What are you most looking forward to at CNS in San Francisco this March?

Kastner: I look forward to celebrating the discoveries in our field in-person with my friends and colleagues. If we have learnt one thing from the pandemic, it is to be thankful for having our wonderful conferences back — they are irreplaceable.

Previous article: Groups Decisions Less Burdensome to the Brain Than Solo Ones
Next article: From the Neurology Clinic to the Lab and Back Again: Addressing Frontal Lobe Syndromes