Our daily lives are full of many decisions – from what to eat for breakfast to what tasks to prioritize in the day. While we make many of these decisions on our own, many are also made with others, such as deciding with your family where to go out to eat or in working on a group task with colleagues. A new study looks at how such group decisions are processed in the brain – finding that shared decisions have a distinct neural pattern and result in different feelings about the decisions than those made solo.

“The idea here is that since making decisions together with others reduces our feeling of responsibility for these decisions, this will be reflected in our brain in both the way we process the outcomes of our decisions and how involved we are in the decision in the first place,” says Marwa El Zein of the Max Planck Institute for Human Development, the lead author on the new study in the Journal of Cognitive Neuroscience. “We will feel less agency or control when making the decision, both before knowing its outcome, as well as  when discovering its outcome.”

In the study, participants rated their responsibility for the outcome of a gambling decision that could either win or lose money. They made their decision in four possible scenarios: on their own (full responsibility); a player could make the decision for them (no responsibility); or together with either one or four other players (shared responsibility). Using magnetoencephalography (MEG), the researchers looked at pre- and post-outcome brain processing, finding that when in the “shared responsibility” scenario, participants had reduced motor intention before learning the outcome of the decision. They also found increased activity in regions of the brain associated with social and reward processing when there was a positive outcome from the group decision. The findings suggest group decisions are less burdensome than ones made alone.

I spoke with El Zein about the study results, their significance, and next steps for the work. 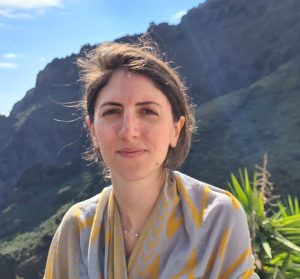 El Zein: I was very keen on working on collective decisions for my post-doc in 2017 and met Bahador Bahrami, an expert in the field to establish a collaboration. Since his team at the time mostly focused on what makes collective decisions better than individual ones, I was interested in working on a different less explored aspect of collective decisions than their accuracy: the fact that they allow to share responsibility with others for decision outcomes, whether the outcome is better or worse than the outcome of an individual decision, and whether the outcome is good or bad in general. I received a Wellcome Trust grant to work on this topic at the Institute of Cognitive Neuroscience, University College London. Conducting an MEG study was part of my grant proposal to characterize the brain mechanisms associated with shared responsibility during collective decisions.

CNS: Can you talk a little bit about how you define “shared responsibility”?

El Zein: I was most excited about two novel results that confirmed our initial predictions:

First, we could see markers of shared responsibility during the time a decision was made – with a decreased motor preparation to make a decision when responsibility was shared with others. This means that just the fact that we know we are part of a group, reduces our action involvement for a decision – even though the action is exactly similar. Note that this reduced motor intention for shared responsibility did not depend on the size of the group: It was similar whether participants made the decision with one person or four other people. This suggests we feel less involved in a decision when we are part of a group to the same extent independently of the size of that group.

Second, thanks to source reconstruction of MEG signals, we could characterize the brain network associated with reduced outcome processing when sharing responsibility with others. While previous EEG studies showed similar changes in outcome processing for actions where people’s agency was reduced, this study is the first to our knowledge to reveal the associated brain regions.

A behavioral finding that was somehow surprising to us was that being in a group did not increase how much participants disavowed responsibility if it led to losing. Participants did however increase how much credit they took when the outcome turned out positive leading to winning, specifically when they were part of the group. And receiving this positive outcome as a group involved brain regions associated with reward and social processing. Therefore, sharing responsibility with others and getting one’s group confirmation for a decision may be rewarding over and above the actual reward itself.

CNS: What are the possible applications of this work?

El Zein: These findings about responsibility in the human brain can be relevant to societal domains, for example in the medical sector where decision outcomes are often unpredictable: When doctors make a difficult medical decision as a team of doctors, or a board of scientists make recommendations, such as during a pandemic, rather than on their own, it can help reduce their feelings of responsibility and the associated emotional burden for such important and stressful decisions. This becomes more complex if legal responsibility is at stake and if someone has to actually face consequences of a decision –  feeling less responsible does of course not mean that they should be judged less responsible and face less consequences in case of error.

El Zein: The next step is to understand how this decreased responsibility and agency during collective decisions changes learning. Is it the case that we learn less if we are part of a group since we reduce our perception of outcomes? Or can sharing responsibility with others have a beneficial effect on how we learn? Does that depend on whether the members of the group are, i.e. people we care about – (people with whom we share an identity such as family, country etc -from our in-group in the social identity theory terms) or not (from our out-group, people we have no common identity with). This is part of my current work at the Adaptive Rationality Center, Max Planck Institute for Human Development.

CNS: Is there anything else you would like to add?

Ek Zein: I would like to clarify that doing a neuroimaging experiment required us to control for the way the collective decisions were implemented: Participants did not actually make any decision together or discuss their decision. Instead, we used a majority vote decision that showed participants what the final group decision was. So, our results are limited to this non-interactive group decision context. However, the fact that we found such effects of being in a group on responsibility and agency even in such a minimal context is a great indicator that these results should be even stronger if people are actually making a decision together interactively. This would be hard to test in a neuroimaging experiment, but dual EEG and MEG systems are now in place and could allow us to extend our work to such interactive scenarios that are closer to real life group decision-making.

Previous article: The Extra Reward of Praise from Superiors
Next article: When Philosophical Questions Turn to Neuroscience Experimentation