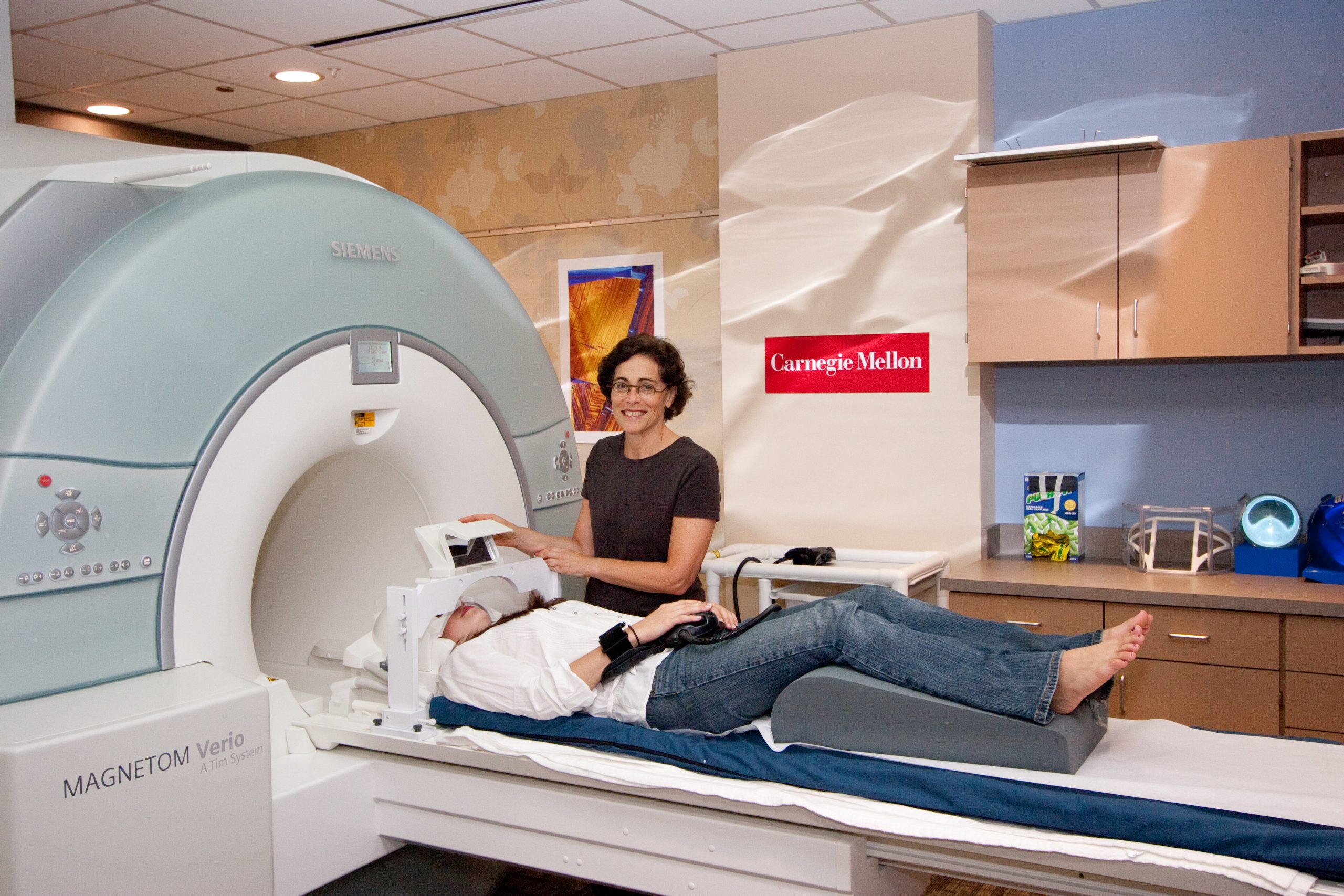 For the past 30 years, Marlene Behrmann has been on a mission to answer some of the biggest questions in cognitive neuroscience about how visual function in the brain maps onto structure. Along her journey, she has explored a wide range of topics, including autism, migraines, aphasia, agnosia, and more.

“These seemingly disparate topics all feed a single narrative and that is how does the brain make meaningful sense of the sparse signals received from the eyes?,” says Behrmann, a cognitive neuroscientist at Carnegie Melon University. “Deep answers remain elusive and so persistence and perseverance are critical. Somewhere along the way, there may be a small insight, and this can tide one over until the next small insight is obtained. The aggregation of these tidbits, for me, is enormously satisfying.”

CNS is now awarding her for her contributions to this aggregation of knowledge with the 2020 Fred Kavli Distinguished Career Contributions Award. We spoke with Behrmann about her early career, work she’ll be presenting at the 2020 CNS annual meeting, her experiences working with children, and some tips attending our annual conference this March in Boston.

CNS: What first got you interested in specifically studying visual cognition?

Behrmann: I was initially trained as a speech pathologist and audiologist, and I developed and implemented intervention plans for adults with aphasia (deficit in language following brain damage such as a stroke or tumor). For my master’s degree dissertation, I was specifically interested in the reading abilities of the patients with aphasia, as almost all the work in the field was done on spoken language and very little attention had been paid to deficits in visual language. Visual language, however, is so crucial for our literate society. In designing the study to evaluate the reading and writing skills of the adults with aphasia, I was required to become familiar with the front-end of reading. I then became increasingly interested in visual pattern recognition and its neural correlates. I confess that I also came to believe that understanding the neurobiology of language was much more challenging than understanding the visual system ⁠— where we have good animal models ⁠— so I think I decided to look where the light shines brighter.

More generally, if we step back, we know that there are many myths that pervade the popular press regarding the division of labor of the two hemispheres, for example, the claim that the left hemisphere is more analytic (as well as unexciting!), whereas the right hemisphere is creative and emotional. Establishing the facts and disseminating this information both in academia and in the popular press is critical.

CNS: Why is it important to you to understand the functional organization of the hemispheres of the brain?

Behrmann: How the brain is organized is of great relevance if we are to understand the relationship between brain structure and brain function. If we assume that structure is in the service of function, we can gain insight into function from studying structure. One of the key structural divisions of the brain is its division into two hemispheres. So, there remain many questions about the individual, as well as joint, contribution of the two hemispheres to most aspects of perception and cognition, and questions about the ontogenetic (from birth over development within and individual) and the phylogenetic (across species) contributions of the hemispheres are still open. Along with these foundational questions are questions about plasticity and the potential for reorganization of the hemispheric functions.

More generally, if we step back, we know that there are many myths that pervade the popular press regarding the division of labor of the two hemispheres, for example, the claim that the left hemisphere is more analytic (as well as unexciting!), whereas the right hemisphere is creative and emotional. Establishing the facts and disseminating this information both in academia and in the popular press is critical.

CNS: You presented the keynote for the CNS 2014 meeting about word versus face recognition in the brain’s hemispheres. What has changed most in your work since then?

Behrmann: Yes, in 2014, I showed data from both behavioral and EEG studies conducted with children, adolescents and adults. The key finding is that prior to the acquisition of literacy (word recognition), face recognition is being acquired in both left and right ventral occipitotemporal cortex (VOTC). However, as literacy is acquired around age 5 or 6, the left VOTC becomes increasingly tuned to orthographic representations (to connect visual and language representations in left hemisphere), and, as a result of the competition for representation between face and word inputs in left VOTC, the right VOTC becomes increasingly tuned for face recognition.

Since 2014, I and my collaborators have set out a formal computational account of hemispheric organization, its emergence and breakdown, including in a new publication now in-press in Perception. In addition, since that time, there have been many more empirical studies evaluating the principles of this account. For example, we showed that patients with a circumscribed unilateral lesion to either the left or right VOTC showed recognition deficits in processing both words and faces although with weighted asymmetry: a left hemisphere lesion give rise to a more severe word and less severe face recognition impairment and, conversely, a right hemisphere lesion gives rise to a more severe face and less severe word recognition deficit compared to matched controls.

CNS: You have also been working more with children since then, right?

Behrmann: Yes, we have had the opportunity to study the visual system of children who have undergone surgical lobectomy of VOTC or full hemispherectomy as a means of managing pharmacologically intractable epilepsy. The question posed here concerns the ability of the single, preserved VOTC to represent visual input, such as faces and words, and the concurrent behavioral competence of these individuals. In this year’s CNS talk, I will show both psychophysics, as well as neuroimaging data, that highlight the organization of the preserved VOTC in the single hemisphere of these individuals, and I will argue that interrogating the brains of such individuals can help us understand the constraints on brain organization and the upper bounds of plasticity.

Even though this work is difficult, it is amazing and inspiring to work with these patients and their families. I am repeatedly humbled by the commitment and dedication of family members.

CNS: What is it like working with such young subjects?

Behrmann: Collecting reliable data from young subjects is difficult by anyone’s reckoning. Using a simulator of the MRI setup, we have had success in developing ways to train young participants to be still in the magnet and the experiments have gone well. It has been quite a challenge scanning young participants with brain disorders, such as autism or post-surgical cases of lobectomy/hemispherectomy. These children have been scanned many times, but they are generally sedated for their scans at the hospital. We tried to scan a 7-year-old not that long ago and, notwithstanding our simulation efforts, he tried to climb off the bed with the coil still attached to his head. Needless to say, we had been monitoring him closely and were able to rush in and take control of the situation.

Even though this work is difficult, it is amazing and inspiring to work with these patients and their families. I am repeatedly humbled by the commitment and dedication of family members. In the last 6 months, I have spent quite a bit of time with families in which a child has gone or is about to undergo cortical resection. This is seemingly such a radical surgery ⁠— although its efficacy is very good ⁠— and I try to put myself in the shoes of these parents. I also feel a strong sense of commitment to the patients and so any data collected from patients are, in my mind, precious, and we owe it to the participants to publish and make available the data.

With respect to technology, what a great time to be alive! We have new data acquisition methods as well as analytic methods and these have permitted unprecedented progress.

CNS: What has surprised you most in your work?

Behrmann: I confess that I am astonished at how well the lobectomy/hemispherectomy children do post-surgically. Much of our work reveals that removal of the occipital lobe results in persistent hemianopia but that the visual skills of the children are comparable to that of age matched controls and this is true even in cases of full hemispherectomy. When I ponder the deep questions, I wonder why, then, do we need two hemispheres when one seems to suffice, except for mapping the left and right visual fields. Obviously, this is simplistic but it gets to core questions about plasticity and dynamic (re)organization of cortical circuits.

CNS: What technologies are enabling this work?

Behrmann: With respect to technology, what a great time to be alive! We have new data acquisition methods as well as analytic methods and these have permitted unprecedented progress. In addition to new MRI structural and functional methods, there are also new methods in the temporal domain. With my colleagues Amada Robinson, Pulkit Grover and Shawn Kelly, we have developed and used an ultra-high resolution EEG system and have shown that classification accuracy of EEG signals collected in response checkerboard images of low, medium and high spatial frequency was greater than with a number of lower resolution alternatives. It’s also awesome that people are building new probes and new devices and that progress is happening before our very eyes. As for analytic tools, adoption of new statistical methods, or old methods in new ways, allow us to address questions which could not be addressed previously. Of course, the use of machine learning methods has been a great boon to cognitive neuroscience and, it is my view that we are on the cusp of making good progress now that we have a new set of tools  at our fingertips.

CNS: As a regular CNS meeting attendee, any tips for newcomers? And what are you most looking forward to at the meeting?

Behrmann: My tip is to go to listen to talks just slightly outside your field of expertise and/or interest. I find this a good mechanism for expanding my knowledge in the field and this venturing to the proximal zone (at the edge of what one knows) often gives me added insights into my own work. Also, if possible, step up and ask a question of the speaker. Active engagement makes the meeting better for everyone. I’m looking forward to updates on work I have been tracking and I’d be lying if I did not say that I am looking forward to seeing lots of friends (-:

CNS: Anything else you’d like to add that I didn’t ask about?

Behrmann: I am so honored and grateful for this recognition. I need to recognize the contribution of the many undergraduate and graduate students who have worked in my lab as well as the valuable work done by many postdocs over the years. I am also immensely privileged to collaborate with incredible scientists and clinicians, without whom this work would not have been possible. I also thank the funding agencies for supporting my work over many years and appreciate the backing I have received. Last but not least, I am grateful to the Cognitive Neuroscience Society and the James S. McDonnell Foundation ⁠— I first became deeply immersed in this field when I attended Summer Brain Camp at Dartmouth College and it has been a fun ride since then.

For more of Behrmann’s work, visit her lab website.