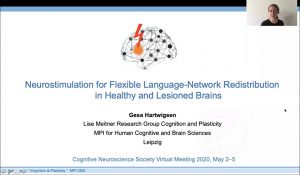 In recent years, scientists have used neurostimulation techniques such as transcranial magnetic stimulation (TMS) to help understand how various aspects of the brain work. By sending electrical currents to one part of the brain, they can help isolate functionality. Such studies are especially valuable in understanding how the brain can reorganize in the wake of an injury, such as a stroke.

As a doctoral student in the Boston University Aphasia Research Laboratory studying rehabilitation-induced neuroplasticity in young adults with language and cognitive deficits after brain injury, I am interested in learning how TMS can be used to understand these processes and potentially promote their recovery. Thus, I was naturally drawn to the work shared by one research group using TMS to investigate language networks in healthy and lesioned brains at the CNS 2020 virtual meeting this month.

Gesa Hartwigsen of the Lise Meitner Research Group Cognition and Plasticity, Max Planck Institute for Human Cognitive and Brain Sciences in Germany presented a series of studies in which she and colleagues disrupted the language network of healthy individuals via TMS. They then studied that short-term reorganization by measuring task performance during a functional magnetic resonance imaging (fMRI) scan (i.e., 30-45 minutes after stimulus presentation). 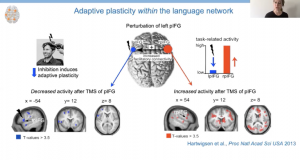 In an initial study, healthy participants underwent TMS to inhibit activity in left inferior frontal gyrus (LIFG), which is believed to be important for pseudoword repetition (i.e., words that can be pronounced, but do not carry meaning). They were then scanned while repeating real and pseudo words presented aloud or in writing. Analysis of the fMRI data revealed decreased task-related activity in the posterior LIFG and increased task-related activity in the posterior right IFG (RIFG) while repeating pseudowords. Hartwigsen explained that they  interpreted this finding as evidence of short-term reorganization as the posterior RIFG was not recruited for pseudoword repetition before TMS.

In another study, the researchers further investigated the plasticity of the language network by applying inhibitory TMS over left angular gyrus (LAG), inhibitory TMS over left supramarginal gyrus (SMG), or placebo TMS while healthy participants performed semantic judgments (i.e., deciding if an object was natural or manmade). They found reductions in task-related activity in LAG after inhibitory stimulation, but participants were still able to perform the task well. They also found an increase in task-related activity in areas of the brain important for phonological processing: LIFG, LSMG, and superior parietal lobule (i.e., RSPL, domain general region) – none of which were involved in phonological processing before TMS. Again, inhibition of one area of the brain predicted upregulation of other areas. 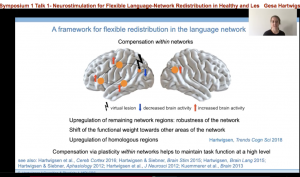 These studies and more supported the development of a framework to describe the flexible redistribution of the language network. Essentially, this framework is two-fold. One, when a node for a particular language function is disrupted by a virtual lesion —such as one created by TMS — or an actual lesion (i.e. stroke), compensation can occur within the network. For example, the brain may upregulate areas close to the lesion; or shift to other areas of the network that may not have participated in the task before, but the lesion has revealed their capacity.  Additionally, right hemisphere homologues can support task function.

Secondly, when a node for a particular language function is disrupted, the compensation can also occur across different networks. This compensation may be more likely to occur when there is large-scale disruption of the network. Further domain general regions that are important for attention, working memory, and cognitive control may be recruited to support task completion, which is another example of across network compensation.

Most of the work supporting this framework has been conducted in healthy brains, but, it is also important to understand how this plasticity plays out in lesioned brains. Hartwigsen and her group did just that. Twelve individuals with chronic aphasia after sustaining lesions primarily in the temporo-parietal cortex underwent fMRI while performing phonological and semantic tasks. They had received inhibitory TMS over anterior LIFG (important for semantic processing) and posterior IFG (important for phonological processing). Behaviorally, TMS over posterior LIFG resulted in delayed response to phonological tasks and TMS over anterior IFG resulted in delayed response to semantic tasks, which suggests functional specialization of IFG. 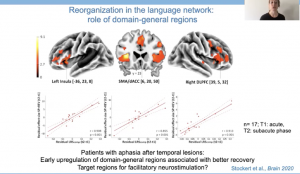 Neurally, Hartwigsen focused on the phonological task showing downregulation of task-related activity in posterior LIFG after stimulation and that the response delay to the phonological task predicted the upregulation in right supramarginal gyrus (RSMG). In light of other work in healthy individuals showing that inhibition of RSMG hinders phonological processing, this finding suggests that an increase in brain activation in the right hemisphere (opposite the lesion) was compensatory in nature. Analysis of structural connections revealed that the more intact the right superior longitudinal fasciculus (i.e., connects posterior regions like RSMG to anterior regions of the language network), the faster participants responded to the phonological decision task, emphasizing that language is a network process.

Given the devastating impact stroke can have on communication and the relatively modest gains achieved with standard language therapy for aphasia, I am eagerly anticipating the results of future work investigating the potential benefits of TMS to language recovery in patients with aphasia.

The work presented by Hartwigsen during the CNS 2020 virtual meeting is incredibly valuable for understanding reorganization of the language network after stroke and more fully appreciating the role of the domain-general network in language recovery. In terms of my own work, it provides a framework for thinking about the brain activation patterns I may see in the patient data I am collecting as part of my dissertation work. It also aligns with previous work I have been involved in, demonstrating that individuals with stronger non-linguistic cognitive skills had better language therapy outcomes. It is possible that these non-linguistic skills were supported by the domain-general network, although that remains to be empirically tested.

Given the devastating impact stroke can have on communication and the relatively modest gains achieved with standard language therapy for aphasia, I am eagerly anticipating the results of future work investigating the potential benefits of TMS to language recovery in patients with aphasia. I feel fortunate to be in research during this innovative time.

Natalie Gilmore, M.S., CCC-SLP is a doctoral student in the Department of Speech, Language & Hearing Sciences at the Sargent College of Health & Rehabilitation Sciences of Boston University. She studies rehabilitation-induced recovery of language and cognitive function after brain injury in the Aphasia Research Laboratory with Swathi Kiran.