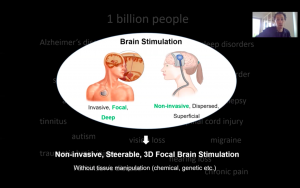 Being able to directly target specific areas of the brain is important both for cognitive neuroscientists seeking to establish direct causal links between neural signal and cognitive processes and for clinicians treating neurological disorders. The gold standard for approaching such tasks has been to directly manipulate the brain during surgical interventions via electrical stimulation. However, these techniques are invasive and, thus, can be used only in specific medical cases in humans. At the Cognitive Neuroscience Society (CNS) 2020 virtual meeting, researchers discussed novel approaches to non-invasive brain stimulation, introducing new work on promising techniques, such as ultrasound and non-invasive deep brain stimulation.

Some of the most popular noninvasive brain stimulation techniques used over the last decades are transcranial magnetic and transcranial electrical stimulations. These techniques have proven efficacy in different pathologies but present some limitations. The stimulation is generally superficial and dispersed. Nir Grossman, assistant professor at the Imperial College London, presented the different steps that led him and his team to validate a new tool called “non-invasive deep brain stimulation” that has the potential to reach these deep brain structures without any surgery or chemicals introduced in the body. The hope is to expand our knowledge of the living brain while offering new options for future clinical applications.

Composed of two pairs of electrodes that are positioned on the skull, the system produces two different electrical currents inside the brain at frequencies too high to recruit neural firing but for which the difference in frequencies is within the dynamic range of neural firing. The stimulation of neural activity can then occur through the temporal interference between these two fields in a specific region where these fields overlap. After validating this concept through modeling, they tested it on living mouse brains and were able to stimulate neurons in the hippocampus without recruiting neurons in other parts of the cortex. 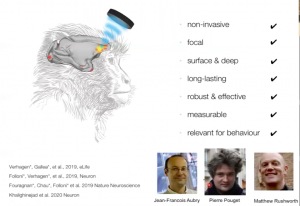 Importantly, Grossman explained, this technique did not produce any damage to the brain tissue. Further, by changing the electrical currents while keeping the electrodes at the same location on the skull, the researchers could establish brain-behavior relationships between different motor movements and the stimulation of specific parts of the motor cortex. Preliminary fMRI results in humans show that this technique has the potential as well to recruit activity in specific brain regions.

Another emerging way to non-invasively stimulate the brain is with transcranial ultrasonic stimulation (TUS). The ultrasound’s effect on brain activity is not clearly defined yet but the main hypothesis is that the sound wave impacts neuronal cells in a mechanical way which causes the modulation of neuronal activity. Similar to the technique Grossman presented, Jérôme Sallet, research fellow at Oxford University and chair of symposium, reported that TUS can be safely applied focally to both superficial (e.g. frontopolar cortex) and deep (e.g. amygdala) brain structures in monkeys. Ultrasonic neuromodulation can serve different purposes, he said, from testing the role of one brain region to investigating whether two regions are interacting with each other during a task.

An interesting aspect for potential clinical use is that the effect produced by the ultrasound can persist even after the stimulation ends. Chris Butler, associate professor at Oxford University, recommended using auditory stimulus masking to avoid auditory confounds when testing participants with transcranial ultrasonic stimulation.

These new focal brain stimulation techniques open new avenues of research toward precision and personalized medicine and rehabilitation, which are key to maximize treatment outcomes. 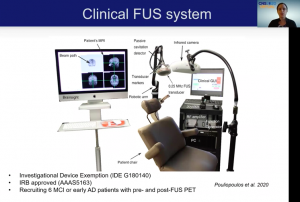 As Grossman said during the symposium, these non-invasive brain stimulation techniques “do not replace existing brain stimulation modalities, but instead add more capabilities to this ecosystem of brain stimulation technologies.” For instance, Elisa Konofagou, professor at Columbia University, has developed focal ultrasound-based technologies that can open the blood-brain barrier to let the drugs permeate the brain and has also started to test this technique on patients with Alzheimer’s disease to improve cognitive function.

These novel approaches trace the path for new ways to manipulate brain activity in order to better understand the mind and to translate this knowledge to the clinic to further improve cognitive abilities of patients with psychiatric and neurological disorders. As a doctoral student interested in post-stroke language disorders and language recovery, I am excited to have had the opportunity to learn about these promising techniques early in my career and I am looking forward to reading future studies published on this topic in humans with pathological brains.

Indeed, brain stimulation is a recent and exciting field of research in stroke rehabilitation as it can help to improve language and cognition in patients. Given that the brain reorganizes itself functionally and structurally after a stroke, it will be interesting to see how these changes may affect assumptions of brain stimulation models based on animals and healthy human data, as presented in this symposium. I am looking forward to future development and application of these non-invasive approaches for cognitive rehabilitation. These new focal brain stimulation techniques open new avenues of research toward precision and personalized medicine and rehabilitation, which are key to maximize treatment outcomes.

Anne Billot, M.S., is a doctoral student in the Department of Behavioral Neuroscience at Boston University. She studies the neural basis of post-stroke aphasia and language recovery at the Aphasia Research Laboratory of Sargent College of Health and Rehabilitation Sciences with Swathi Kiran.