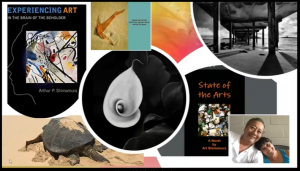 Memory, aesthetics, inhibitory control, visual perception, film, photography, and poetry — these were just a few of the themes on display on the last day of CNS 2021 and all brought together through a single remarkable individual, Art Shimamura. A founding member of CNS who passed away last year, Shimamura left a vast scientific and personal legacy, as I learned in the special session to honor him and his work. In a series of talks from Rich Ivry, Juliana Baldo, Charan Ranganath, Mike Andreson, and Bill Prinzmetal, I gained a deeper understanding of the impact a single scientist can have — and learned some critical lessons that are both inspirational and practical for me as I continue my cognitive neuroscience training.

1. Make acronyms for your ideas whenever possible.

The title of this blog post is an homage to something I learned during the Q&A session after the symposium. It turns out that Shimamura liked to use acronyms. For instance, some of his lab members and trainees were once joking about using the acronym CoBRA to define a theory of episodic memory, Shimamura found a way to use this acronym to describe “Cortical Binding of Relational Activity.”Other Shimamura acronyms include his “Get SMART” (Get Social, Get Moving, Get Artistic, Ge Responsive, and Get Thinking) mental health program, as well as his applied principles for learning and education model: MARGE (Motivate, Attend, Relate, Generate, and Evaluate; which he made available for free online). These not only make it much easier to remember models and theories but they also demonstrate just how clever Shimamura could be with words.

2.  Scientific writing on complex topics need not be hard to understand.

Despite covering complex topics, Shimamura’s articles, blog, and books are quite easy to read. For someone newer to neuroscience struggling to understand the complex modelling that can go into neural networks (with apologies to those working in that area) or for someone attempting to digest complex philosophy and theory (I will never understand Kant), Shimamura’s writing is wonderful. It also points out a common flaw in academia: So often, we become deeply entrenched in our esoteric fields that we forget how difficult our work can be to understand for other people. Sometimes, we even falsely associate complexity with importance. Shimamura’s publications are a reminder that this complexity is not necessary and that we need to remember to communicate our work with others for it to be applied broadly. It is also helpful to make our work relatable.

“Every lecture should include references to donuts and boogers.” -Art Shimamura

3. Incorporate everyday examples and humor into writing and talks.

Along with having an easy-to-understand writing style, Shimamura encouraged others to use funny examples. Ivry noted that Shimamura once told him “Every lecture should include references to donuts and boogers.” Although sometimes his jokes were taken as fact by diligent students, which Baldo mentioned in one of her stories, Shimamura’s use of humor was engaging for others and endeared him to his students.The use of relatable examples extended to his academic writing as well, for instance, in his article Remembering the past: Neural substrates underlying episodic encoding and retrieval (2014), he introduces episodic memory thusly: “What did you eat for dinner last night? If you were able to retrieve the information (paella, in my case) it is likely that you also remembered other features…” (p. 257)Shimamura’s legacy, as expressed through his colleagues and trainees, exemplifies how being an important person in your field does not mean that you have to be serious, indifferent, and unapproachable.

There was a point in his late life when Shimamura also struggled to write. In one of his blog posts on Psychology Today, he mentioned that he had not been following his Get SMART program while he was dealing with chemotherapy for his pancreatic cancer. He no longer felt motivated to write, as he may not be able to finish any project he started. While discussing this blog post, Ivry mentioned that part of what brought Shimamura back to writing was his wife reminding him that it was not worth worrying about finishing; writing at all would be psychologically beneficial. He then went on to write many blog posts on lifelong learning, which became MARGE, as well as a book on his walks around O’ahu. (I found this story particularly inspiring when sitting down to write this blog post!)

5. You don’t always end up where you think you will.

When introducing the symposium, Ivry mentioned how Shimamura started his university education at the University of California, Santa Barbara, to be close to water because “he wanted to be the next Jacques Cousteau.” The study of marine life seems far flung from Shimamura’s work in cognitive neuroscience (though Jacques Cousteau was also a photographer and author, like Dr. Shimamura eventually became). Prinzmetal later added to this by mentioning that Shimamura changed his major from biology to psychology after visiting Walter Gogel’s lab and becoming fascinated by visual perception. Despite not becoming a famed marine biologist, Shimamura followed his interests to succeed in cognitive neuroscience and thus reminds us that sometimes, your plans can change but possibly for the better.

6. You don’t have to focus on only one field in your work.

Extending from Shimamura’s shift in focus during his education, his variety of contributions both within and beyond cognitive neuroscience is comforting for those of us who have a variety of interests. Speaking as a graduate student, it seems to me like when you come into a lab, the majority of your work has to be related as much as possible to your supervisor’s area of research. Though many supervisors are very flexible, this seems limiting if you have interests that are not readily connected.Shimamura may be known primarily for work on memory, but his examinations of other areas, including the neurocognitive aspects of art and explanations for visual illusions, demonstrate how much one can branch out when motivated and supported by colleagues. 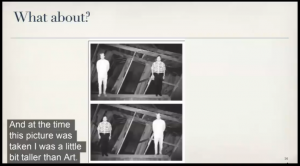 7. Long established theories can be altered with the addition of new perspectives.

Prinzmetal spoke about his personal experiences exploring the Santa Cruz “Mystery Spot” with Shimamura and how this led them to a new conceptualization of visual illusions. The “Mystery Spot” is a shack built in such a way that it is tilted 15 degrees counter clockwise relative to gravity. Thus, this little house creates many interesting visual illusions, as people seemingly stand at an impossible angle relative to the floor and furniture.Shimamura was most interested in how this building influenced the perception of others’ height, relative to the tilted roof of the shack. After much research, Prinzmetal realized that what they had been studying was essentially “half of the Ponzo Illusion” where people usually perceive two lines of equal length, between two non-parallel lines, to be unequal. This had been previously explained in terms of how we understand depth through linear perspective and vanishing points. The non-parallel lines would give the illusion of depth, causing one line to seem ‘closer’ to the viewer and thus ‘shorter.’What Shimamura brought into this was how the orientation of our perceptions was altered specifically by the closer non-parallel line (the roof of the “mystery spot”). This drew on Dr. Gogel’s adjacency principle, where a stimulus is more affected by the things near it rather than further away. Shimamura and Prinzmetal went on to test this idea with multiple conditions involving simple line drawings of what was essentially a hallway with two lines of equal length placed in various locations relative to the ‘walls’ and ‘floor’ of the hallway. Through considering what already seemed to have an explanation in different terms, Shimamura and Prinzmetal were able to improve upon established theories for visual illusions. 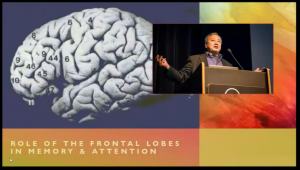 8. Sometimes all it takes is a qualitative look at data to find something novel.

Baldo spoke about her experience doing research with Shimamura, examining stroke patients with focal lesions in the left or right lateral prefrontal cortex. They tested these patients on their recall of lists and the quantitative examination of this data confirmed that patients recalled fewer words than controls. However, compared to individuals with temporally related amnesia, the patients with parietal lesions were recalling more words. Thus, the frontal lobe had to be related to memory, but not in the same way as the temporal lobe. So, they asked: What components of memory is the frontal lobe related to? The answer to this came with a qualitative examination of the words recalled by patients.Patients with focal prefrontal cortical lesions were specifically failing to recall words in semantic clusters. They were also showing intrusion of words that were semantically related to those on the list, sometimes repeatedly. Further studying this phenomenon, Baldo and Shimamura found that patients could perform equally well on forced choice recognition tasks, but only when distractor words were semantically distinct. They concluded that the lateral prefrontal cortex was critical for strategic memory retrieval, distinct from the issues seen in temporal lobe amnesia.This research demonstrates how examining data differently can lead to important conclusions. It is also a reminder that we need to acknowledge the utility of qualitative methods, even in a field where much of our research is quantitatively based.

9. You can have hobbies and still be successful.

Being able to appreciate the qualitative aspect of things was likely helpful in Shimamura’s other endeavors. His non-academic writing, photography, poetry, and love of movies were noted by every speaker, with a central message that you do not have to sacrifice the things you enjoy to be successful in your field. In academia and elsewhere, people often feel guilty for not constantly working. There is a great deal of pressure to constantly be producing new work, getting more awards or funding, and spending any extra time on service work. Shimamura’s art reminds us that you can still be “productive” by spending time on what you enjoy.

10. Even gourmets can enjoy simple things.

Be it through food, analysis, writing, or acronyms, Shimamura reminds us of how sometimes, keeping it simple can be very satisfying.

—
Chelsie (Miko) Hart, M.Sc., is a doctoral student in the Department of Psychology and the University of Calgary. She studies mind wandering and executive functioning in attention deficit hyperactivity disorder with Julia Kam and Brandy Callahan, with a primary interest in the effects of sex and gender on mental health and cognitive functioning.