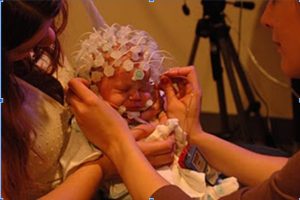 In the world of neurodevelopment, one thing is clear: the earlier the intervention the better. Infancy is a critical time in brain development, and neuroscientists are increasingly identifying factors that can negatively impact cognition and ones that can improve cognition early in life. At the annual meeting of the Cognitive Neuroscience Society (CNS), researchers from the University of Minnesota are presenting new work on two early interventions: one on the potential use of engineered gut microbes for antibiotic-exposed infants and another on a choline supplement to treat infants exposed prenatally to alcohol.

“These talks underscore how patient-based neuroscience can advance the field of neonatal and infant care, providing evidence-based interventions for improving cognition,” says Nathalie Maitre of Nationwide Children’s Hospital, who is chairing the CNS symposium on the neonatal and infant brain. “They also show the interdisciplinary nature of this field, bringing together medical doctors with cutting-edge neuroimaging, as well as other specialized fields like microbiology.”

A microbial approach to infant health

“As a pediatrician specializing in the care of ill newborn infants, I am always concerned with how early-life exposures affect relevant long-term health outcomes,” says Dr. Cheryl Gale of the University of Minnesota. Her team has thus set out to combine microbial genomic analyses, biological computational approaches, and functional brain assessment to better understand neurodevelopment in very young infants.

At CNS, Gale will present new research that shows that infants with different compositions of gut bacteria process auditory and visual stimuli differently during memory tasks. “These results raise the possibility that gut bacteria are involved in the development of brain function,” she says.

The study, published online in Pediatric Research and led by Marie Hickey, compares the brain activity of infants who were given antibiotics to those who were not within their first month of life. The researchers used EEG to record a type of electrical activity called event related potentials (ERPs) in the brains of the infants in response to their mother’s voice or a stranger’s voice – a type of memory called “recognition memory” that can be assessed in preverbal infants before any behavioral changes are apparent.

“Recognition memory is one of the earliest types of explicit memory to develop and is known to be dependent on medial temporal lobe structures, including the hippocampus, the brain region affected by microbiome perturbation in animal models,” Gale explains. Indeed, previous research on the gut-brain connection has been almost exclusively in animal models, making this human study especially valuable and unique. At the same time, the ERP technique has been used extensively in other research to successfully predict a range of behaviors, such as later language development, reading ability, and risk for autism.

While the new study showed a relationship between early antibiotic exposure and brain function in participants, the researchers have yet to determine a causal relationship. “We don’t yet know if there is a definitive cause and effect relationship between microbes and brain function in human infants, but future research will hopefully be able to shed light on this,” Gale says.
The work does raise the possibility of creating engineered microbes as an intervention to help people early in life. “Infancy is a critical time window for brain development, when therapeutic interventions can have effects for the life-course,” Gale says.

A supplement to reverse damage

Despite decades of research showing the detrimental effects of consuming alcohol during pregnancy, fetal alcohol syndrome is still common around the world – affecting approximately 8 of 1000 people in the general population, according to a 2017 study in JAMA Pediatrics. The syndrome leaves infants with structural brain abnormalities and cognitive impairments, among other deleterious effects.

“The further back you go and do your intervention, the more leverage you have to alter the developmental trajectory of that particular child.” -Jeff Wozniak

Jeff Wozniak remembers encountering his first clinical cases of fetal alcohol spectrum disorders early in his career and realizing for the first time “that this was a very unique, poorly understood population with very high needs.” He also realized that there was an absence of imaging studies in this population. “So I became interested in using some of the tools that we had available here at the University of Minnesota to do high-quality imaging of brain structure and function in this understudied population to learn something about how the brain is altered by prenatal alcohol exposure at the earliest stages of development.”

From this work, he and his colleagues have identified a number of ways in which prenatal alcohol exposure causes the loss of brain cells and the interruption of important developmental processes, including gene expression. For example, he says, alcohol may interfere with genes involved in the myelination process throughout the brain.

This research has included work on a potential treatment, specifically an early intervention through supplementing with the nutrient choline. Over a decade-long randomized, double-blind, and placebo-controlled study, they have seen how postnatal choline supplementation in 2- to 5-year-olds with prenatal alcohol exposure has translated to cognitive benefits compared to those without the supplementation.

At CNS, he will present findings from participants, four years after their choline supplementation and with no further interventions since. Those who received choline early in life showed higher non-verbal intelligence, higher visual-spatial skill, higher working memory ability, better verbal memory, and fewer behavioral symptoms of attention deficit hyperactivity disorder (ADHD) than those in the placebo group.
.
“The further back you go and do your intervention, the more leverage you have to alter the developmental trajectory of that particular child,” Wozniak says. “So that was the exciting thing about bringing those children back and looking at their development and seeing much larger choline versus placebo effects in cognitive functions like working memory and even behavioral differences in terms of ADHD.”

The link between nutrients and brain development is not new; for example, folic acid has long been established as a supplement that prevents neural tube disorders. However, longitudinal studies that test the nutritional intervention’s impacts on cognition over time are relatively new, marking an exciting convergence of cognitive neuroscience and pediatric health.

Wozniak sees this work as the start of a potential paradigm shift in addressing a range of neurodevelopmental trajectories and disorders. “Our interventions are baby steps but really important baby steps because they’re showing us and others that we shouldn’t think of these conditions as static injuries that took place prenatally and that that is the end of the story,” he says. “Rather, we should learn about what developmental processes have gone awry and then go back as early as we can in treating these children, identifying them and treating them in a way that optimizes the rest of neurodevelopment.”

—
The symposium “Studying the Neonatal and Infant Brain: From Neuroscience to Interventions” is taking place at 2pmET on Sunday, March 14, 2021 as part of the CNS 2021 Virtual, from March 13-16.